Mariano Alario was born January 27, 1978, in Mar Del Plata, Argentina. His 33 years has taken him on a journey with horses and the sport of Show Jumping that has now landed him at Willowbrook Stables in Petaluma, California, as owner of Estancia Farms, with his wife Nina Herrera-Alario, and son Nico.

As early as he can remember Mariano rode horses.

With his father, Oscar Alario, being the President and head trainer of the Club Hipico Mar del Plata, and a board member of the Federacion Equestre of Argentina, it made sense that Mariano would have horses and riding as a part of his life. While show jumping was always his passion Mariano learned practically every equestrian discipline, including vaulting, polo, endurance, dressage, three-day eventing, and show jumping. Mariano trained under his Father and became one of the youngest and most successful Grand Prix riders in his home country, turning professional by the age of 15.

Still a successful Grand Prix rider, in 2000, Mariano left Argentina for a job opportunity in Spain, to work for one of the most successful endurance racing barns. While in Spain, Mariano truely mastered the art of breaking and starting young horses with the 200 plus two and three year-olds that went through his training program.

In 2002, Mariano followed in his Father’s footsteps once again and moved to the United States. With no job in line at this time Mariano was not sure what the next phase of his career would. After reading an article about a trainer from Argentina, that was now living and working in Rancho Santa Fe, California, Mariano decided to give the man a call and maybe get some advice on where he could find work. Turns out the man was looking for a rider. Mariano worked for Guillermo and Lynn Obligado, at Woodgrove Farms, for the next 3 years and learned the ways of the American horse show world as well as International World Cup and Olympic Show Jumping.

In 2005, Mariano had become well known on the West Coast and was hired by the Kilkenny Crest Farms, of Bend, Oregon, to ride and show their Grand Prix and young horses as well as be the private trainer for their daughter. During Mariano’s time at Kilkenny he had three successful Grand Prix horses and qualified for the 2006 World Cup Finals in Malaysia.

In 2007, Mariano married his wife, Nina, herself a well know rider and trainer on the West Coast, and the decision was made that they would both move to Northern California to start their own business together. After many years of traveling the globe, learning from the best, and working his way up the ladder it was time to land in one place and begin his own operation where he could pass on his knowledge and work doing what he loves.

Now in Petaluma, at Willowbrook Stables, Estancia Farms, is run and owned by Mariano and his wife.

For Mariano, having this barn and helping his clients learn all the angles of this complex sport and achieve their goals within it is a dream come true. His background in so many disciplines of equestrian sport from so many different places in the world have provided him with a comprehensive knowledge of horsemanship, riding, showing, management, and training, that he is able to pass on everyday to his horses and his students. 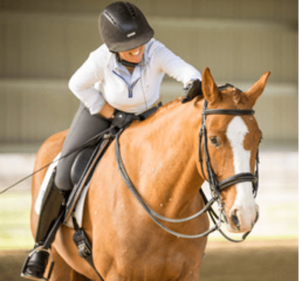 Trainer and professional Dressage rider, Kendall Robinson-Clarke works with a variety of horses, focusing on individual physicality, energy, and attitude. She credits her degree in Equine Business Management for much of her deep knowledge of horse behavior and her philosophy; consider the whole horse- nutrition, healthcare, daily condition, and a training program for competition.

Through proper technique and positive education, clients learn to be in harmony with their horses to improve performance and healthful movement. Kendal is an exuberant competitor on her horse, Qoncorde as well as client horses, up and down the West Coast.